CERN, CHUV and THERYQ join forces for a world first in cancer radiotherapy

CERN, CHUV and THERYQ have signed an agreement for the development of a revolutionary FLASH radiotherapy device 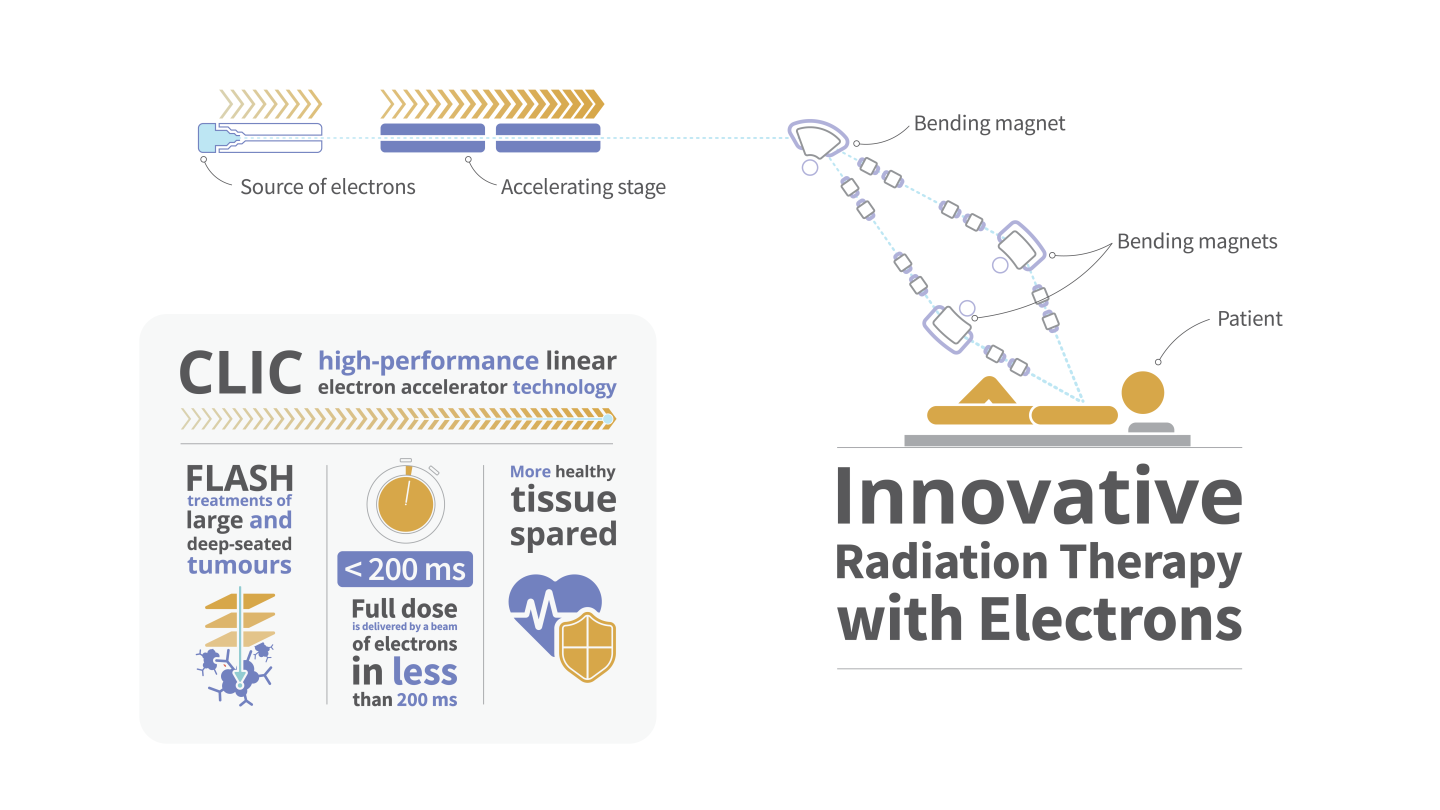 CERN, the Centre Hospitalier Universitaire Vaudois(CHUV) and THERYQ (ALCEN group) have signed an agreement for the development of a revolutionary FLASH radiotherapy device that will use very high-energy electrons (VHEE) to treat cancers that are resistant to conventional treatments, with greatly reduced side effects. The device is the first of its kind. Based on CERN technology, it will be installed at CHUV when ready.

This collaboration is another example of how fundamental research conducted at CERN promotes the development of new technologies that transform society, in particular through collaboration with key partners.

Today's milestone represents an important step forward. The tripartite agreement covers the development, planning, regulatory compliance and construction of the world's first radiotherapy device capable of treating large, deep-seated tumours using the FLASH technique. The device will include a compact linear accelerator based on CERN technology, and will be manufactured by THERYQ, which is part of ALCEN's healthcare division.

The device will use very high-energy electron beams of 100 to 200 MeV, allowing all types of cancers up to a depth of 20 cm to be treated using the FLASH technique. Its compactness allows it to be used in a hospital setting. Besides the health benefits to patients, it also has the potential to decrease the cost of treatment. It is expected to be operational within two years, with the first clinical trials planned for 2025.

Radiation therapy is one of the main forms of cancer treatment, along with chemotherapy, surgery and immunotherapy. Currently, one third of cancers are resistant to conventional radiation therapy. It is in this context that the head of the radiation oncology department at CHUV, Professor Jean Bourhis, and his team pioneered the method of FLASH radiotherapy, which has produced impressive results in pre-clinical animal studies. THERYQ, a spinoff of PMB-ALCEN, has supported the development of FLASH therapy since the beginning in 2013, in particular through a long-standing partnership with CHUV.

VHEE FLASH technology has several advantages in addition to being capable of reaching deep-seated tumors. High-energy electrons can be focused and oriented in a way that is almost impossible with X-rays, and radiotherapy devices based on CERN’s electron accelerator technology will be significantly more compact and less expensive than current proton-based therapy devices. CERN has responded to the challenge of producing a high dose of very high-energy electrons in less than 100 milliseconds, as required for FLASH radiotherapy, by designing a unique accelerator based on CLIC (Compact Linear Collider) technology.

“At CERN, part of our mission is knowledge transfer and we actively work to find applications for our breakthroughs outside the domain of particle physics for the benefit of society at large. This collaboration demonstrates how CERN technologies and expertise, combined with strong partnerships with experts in other fields, can really make an impact,” says Mike Lamont, CERN Director for Accelerators and Technology.

International Day of Women and Girls in Scien...

CMS completes the release of its entire Run 1...

LHCb releases first set of data to the public